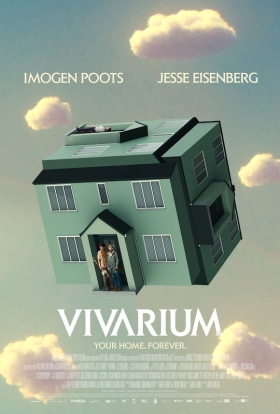 Trying to find their ideal home, a young couple is lured and trapped in a suburban neighbourhood where every house and street is identical and seemingly no way out.

Entirely allegorical, Vivarium joins the club of independent mind-bending films such as Triangle (2009) and Coherence (2013). Does it hit the mark though? It starts by trying to but halfway there it seems that it abandons the idea itself. Based on the short film Foxes (2012), also written and directed by Garrett Shanley and Lorcan Finnegan respectively, its feature adaptation gives the impression of “surrendering”, flattens out until the end of the second act, then it picks up until the end… but the viewer is already “gone” by then. Third collaboration between Imogen Poots and Jesse Eisenberg, showcasing once more the undeniable on-screen chemistry between them.

Personally, I did like it and it did kill some time but when it comes to “Sisyphusean” films, killing some time is just not enough. The end of the second act is worth watching so the toughest part is to try and keep track until then. Maybe not the best film during the quarantine days but if, like me, you are a fan of one-location allegorical thrillers, don’t have any high hopes and give it a shot. You might find yourselves relating to the protagonists more than you expect.