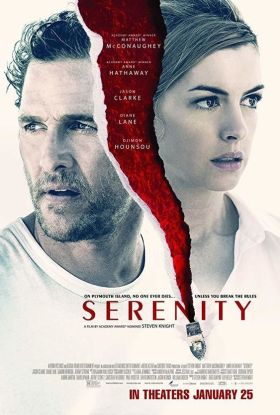 A struggling fisherman, obsessed with catching a particular fish, finds a new purpose when a mysterious woman suddenly shows up in his little island.

Difficult to say much without giving away spoilers. Acting and cinematography are “Serenity’s” strong suits. Directing and editing do their best to reveal the right information at the right time, keep the suspension at the highest level, and the viewer constantly engaged. Does it work? Not for the majority of it. Why?

I have the suspicion that by reading the script, the film’s good intentions would be revealed. On-screen, this is not the case. The story itself is all over the place and that heavily affects character development. The film is definitely not as bad as some claim it is but with A-list cast and crew certainly one would expect more.

As with any other film, watch it and shape your own opinion. You might like it, you might not. At least, you’ll know the reason(s) why.